The successful businessman who went to Chile

A highly valuable short story about productivity and the real value of life. 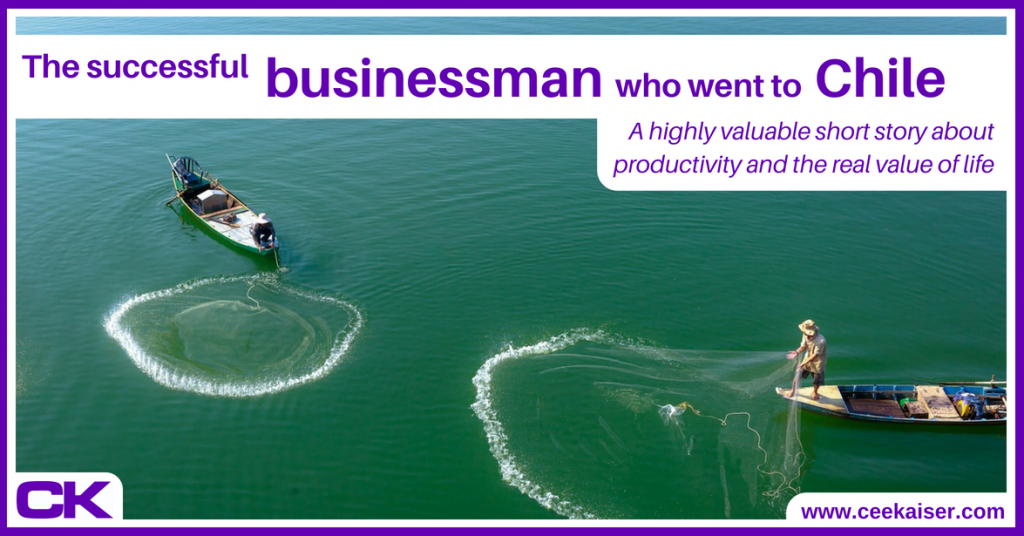 A successful business man went to Chile on holidays. He had worked extremely hard all year, pulled all-nighters and accumulated lots of overtime, but finally had met his targets and pocketed his bonus. One week off in the Southern hemisphere was the least he could do to replenish his energy.

Half-way through the vacation, while sipping his first Corona of the day by the beach just after lunch, toes buried in the sand and overlooking the breathtakingly beautiful bay, he noticed a small fishing boat rowing to shore.

Intrigued, he walked over, helped the middle-aged fisherman pull the boat ashore and offered him a beer.

The fisherman gladly accepted, and so the men sat down and started talking.

“How was your day?” asked the businessman. “Did you catch anything?”

“Yes”, replied the fisherman in remarkably good English, “I caught two fish today. I always catch two fish. One I enjoy with my family for dinner, the other I give to our neighbors, who supply us with rice and vegetables. That’s what we always do.”

“Sounds good”, admitted the businessman. “Do you enjoy fishing?”

“I do indeed.”, answered the fisherman. “It keeps me healthy and strong, and it offers me a purpose to get out of bed in the mornings. And once I’m out at sea, I can let my thoughts wander or sing from the top of my lungs without bothering anyone.”

“What will you do with the rest of the day?”, the businessman wanted to know.

“The same as always”, the fisherman stated. “Head home, play with my three gorgeous children once they get back from school, enjoy dinner with the whole family, and then meet my friends to light up a bonfire by the beach, play the guitar, sing songs and share stories.”

The businessman nodded, lost in thoughts. The fisherman surely had something going for him, but the businessman couldn’t stop thinking about his costly university education and the recently taken productivity courses.

He asked: “Have you ever thought about heading back out to sea after lunch for a few more hours?”

“Why would I do that?”, asked the fisherman, clearly not following the businessman’s train of thought.

The latter explained: “Imagine: You could head out again and catch another two fish. These two fish you could sell on the market and make some money.”

“That’s true.”, agreed the fisherman. “But what do I need the money for? We have built and maintain our own house, we get vegetables and rice from the neighbors, and we live in the most beautiful spot in the world, so we don’t travel much.”

“Well”, began the businessman, “you could save up some money, and buy a second boat. You hire someone to man it, and together you catch 8 fish a day. If you pay your boatman one fish and keep two for yourself, you can sell five fish every day. That adds up quickly, and in no time you’ll buy a third, a fourth and a fifth boat.”

The businessman was in his element now and continued: “Before long, you can hire someone to steer your own boat as well, which frees up all your time to do exactly what you want all day.”

The fisherman pensively followed the businessman’s explanations, thought about it for a short while, then nodded absently.

Just as the businessman thought the fisherman would now get up and row back to sea, the latter inquired: “You surely are a clever person, sir. But tell me – what do you think should I do with all that free time?”

The businessman knew now was his time to seal the deal, and decided to leverage all the knowledge he had gathered about the fisherman so far to his own advantage.

Triumphant he declared: “You could spend the mornings at sea fishing, then return home to play with your children in the afternoon…” He paused briefly as he understood he had been beaten.

“And finally relax in the evenings singing songs and sharing stories with your best friends…” he ended with a dying voice.