May marked the sixth month of me using Heleum. Hence the Heleum Income Report May 2018 offers several additional insights, such as a review of the past half year, a comparison with the Bitcoin market performance and the answer to the question “Was it worth it to invest with Heleum?”.

It has become the longest Heleum income report to date, and the most valuable. 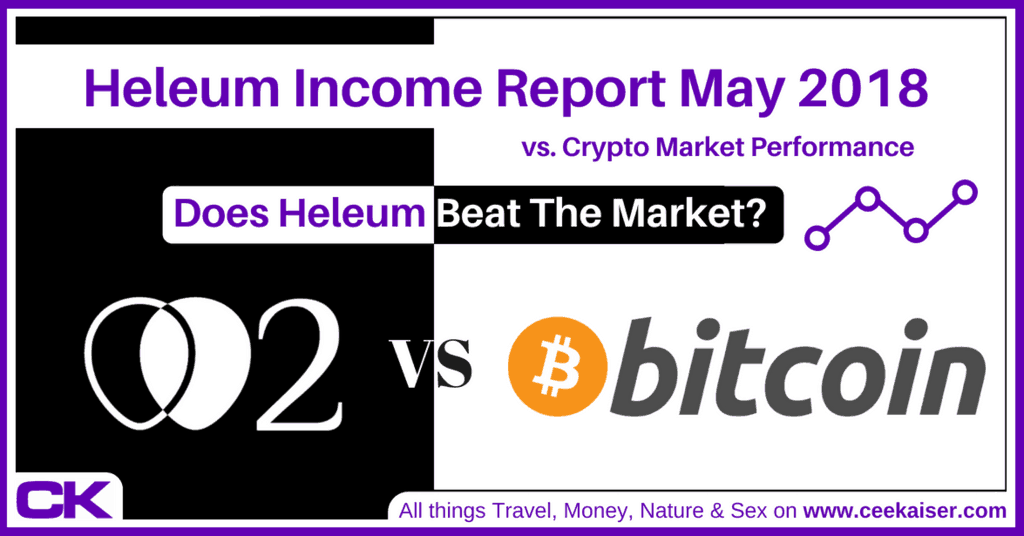 What’s in this article for you:

Contents of Heleum Income Report May 2018 vs. Bitcoin Market Performance

May was an unsuccessful month for cryptocurrency investors. Despite several good news, including Marshall Islands introducing cryptocurrencies as official state currency as first nation worldwide, the price trended downward. 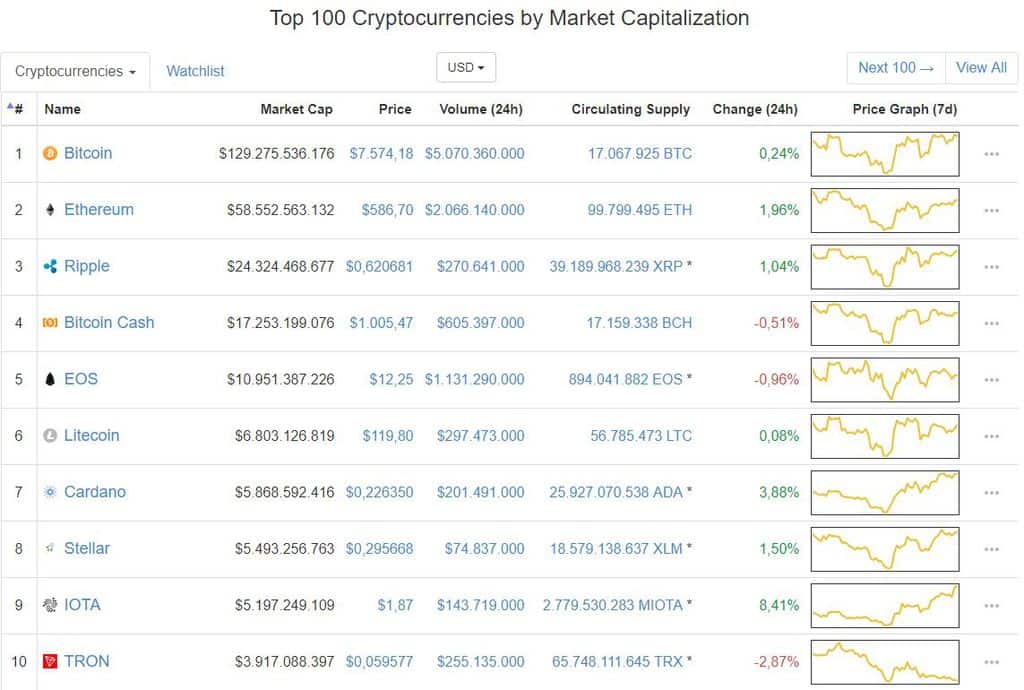 First of all: Thank you, Heleum team, for all your hard work and effort you put into this.

The new features include:

As the team put it, “Heleum is now less risky, more profitable, and better able to adapt to future changes in the cryptocurrency markets.”. They also stated that for the best experience, one should add additional funds to the system, which I duly did. Whether I should have or not, you’ll find below.

Besides launching version 2.0, Heleum also launched a crowdfunding campaign. In case you are interested in funding the project, you can find all details here: heleum.com/seed. Please note the campaign ends on June 7. Investing will make you “own a part of Heleum”, plus grant you a boost for your investments.

After the Heleum’s spectacular April performance, May looked different again.

Heleum tried its best, and version 2.0 kicked into gear on May 16, half-way through. Yet, ‘its best’ wasn’t enough.

Also, not a single balloon has popped yet. And most of them are very far from it. (For me. Other users report first successes.) 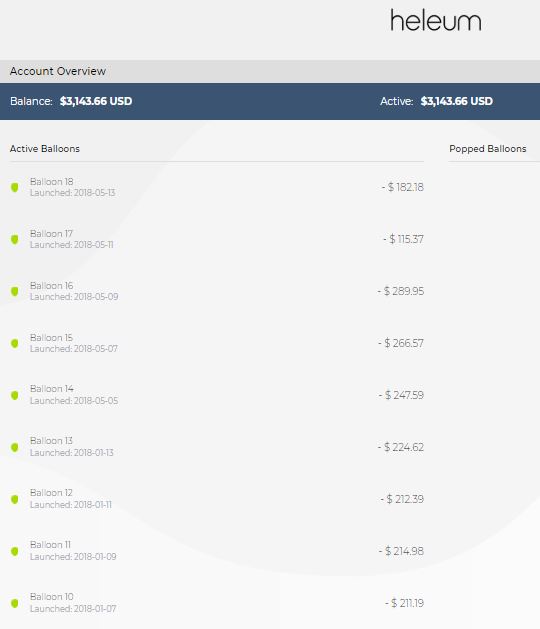 Of course, this raises the question: Should I have simply put my money into Bitcoin, and left it there? Let’s do the math.

After having used Heleum for six months now, it is time for a market comparison. After all, the idea is to earn more (or lose less) money by letting AI algorithms speculate with my money. So the question is whether Heleum beats the market performance or not.

To compare Heleum against the cryptocurrency market performance, I chose Bitcoin’s price curve as benchmark. The following calculations assume you had 1,000 USD invested into both Bitcoin and Heleum on Dec 1, 2017. Which investment would yield the better results?

Note: The Bitcoin price is tracked with Coinmarketcap.com. The Heleum price is calculated from the changes in my portfolio. This change may differ from other users’ Heleum experiences – for the better or the worse.

The above table displays the value development of Heleum vs Bitcoin on a monthly basis. All monthly percentages are taking 100% as base reference. If Heleum achieved 152% in April, this means that in April alone the gains amounted to 52%, not that your entire investment of the past months was back in the blacks.

Monthly value development Heleum vs Bitcoin.
Developments are calculated separate per month, not accumulating to one total.

The disillusioning result: Heleum beats the market only 2 out of 6 months, namely in February and in April.

The good news are, these are two out of three months where Bitcoin gained value. This means when the market increases, Heleum increases faster. However, once the market drops, Heleum drops faster as well.

Note: In case you want to retrace where I got these numbers from, here are all my Heleum Income Reports.

Here is all this information packed into one easy-to-understand graph: 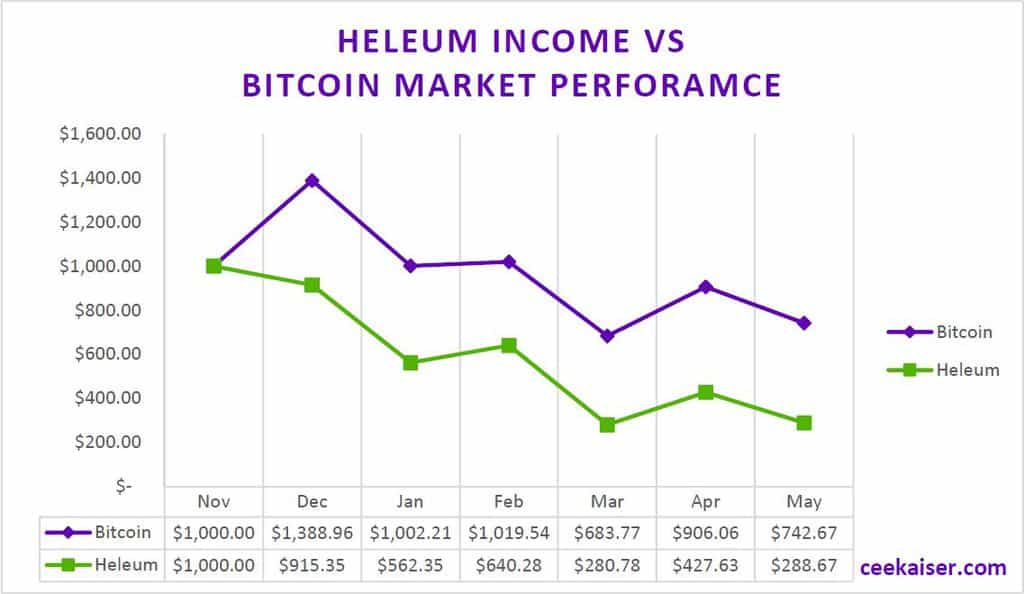 This is how your money would have developed if you had invested 1,000 USD each into both Heleum and Bitcoin on Dec 1, 2017.

Had you put that money into Heleum, and not done anything with it for six months, you’d have lost 712 USD – almost 75%!

Hence the question: Was it worth it to invest with Heleum?

Half-Year Heleum Review: Was It Worth It?

Six months into the game, I wonder whether investing with Heleum was worth it or not.

The cold facts: In total, I invested 5,952 USD into Heleum. Today, I am left with 3,143 USD. 2,809 USD simply evaporated into thin air. Almost half of the investment is gone. Not coming back. Big shame. Even thought it was ‘just gambling money’.

Maybe one of the reasons why I am not filthy rich yet. (Or am I?)

Was it worth it to invest with Heleum? From a financial perspective, it is a clear ‘No’.

Then again, I faithfully admit it was my decision. I was aware of the risks which investments yield, and I decided to take the risks. Sure, I could’ve put my money purely on Bitcoin, and would be better off today. But I didn’t, since I couldn’t foresee the future.

I am not blaming Heleum for being a scam or a bad company. On the contrary, being in frequent touch with its founder and CEO Pace, Heleum seems to be a good company, with hard-working people behind it. Just the algorithm they created is not at the stage where investors would like it to be quite yet.

Fingers crossed this will change. And maybe version 2.0 yields some positive surprises for us. As you all (should) know, Heleum is designed to be a long-term investment vehicle.

Will I Keep Investing With Heleum?

So will I keep investing with Heleum? The answer to that one is a ‘Yes‘.

Mainly for these three reasons:

As both Heinz Ketchup and Guinness already said in their ad campaigns:

“Good things come to those who wait.”

In case you agree, feel free to start investing with Heleum today.

Looking at my May outlook in April’s Heleum Income Report, I must admit I was completely wrong. Bitcoin’s price decreased and Heleum’s version 2.0 didn’t skyrocket my balloons.

The only thing I was right about was that one fact I can control myself: The promise to keep you updated on all the latest developments with my newsletter.

So for June, let me be more careful. Currently, I cannot wholeheartedly recommend investing with Heleum, as much as I’d love to. I still like the idea, and the project, and the team surely works darn hard to make things work.

However, the above review shows that so far Heleum is losing money, even more than a Bitcoin hodl strategy would lose. Whether version 2.0 will fix this in the upcoming weeks and month, I do not know, but I’ll happily let you know how things proceed.

Stay In The Loop

Sign up for my bi-weekly newsletter below, and receive a short, entertaining email every other week. Focus topics are money, travel, nature and sex.

At times I even try to be funny, despite being German. You should definitely witness that. My newsletter are free, and you can unsubscribe any time.

Also, please join our Heleum discussion on Facebook. It often is extremely entertaining.

Disclaimer: As always, none of this is official investment advice, just my personal opinion. Should you decide to invest with Heleum, please do so responsibly.